Shame and guilt are rooted within the matrix of everyone’s life; no one is spared. They are the most dangerous threat to our personal power and to our very life! shame guilt cannot destroy our powerful emotions but they change our positive emotions to negative ones. They instigate suicide, war, hatred, jealousy, unworthiness, depression, anxiety, etc. shame guilt target our soul and blacken our spirit in our attempts to peace, love, creativity, and joy.

We can and will win against shame guilt. However, first, we need to recognize its chameleon nature and how to release them.

Until the 19th-century psychology was a study of the spirit or soul. After that time psychology became a study of the mind and authorities gave labels to the different states of being. These states were eventually called disease states. However, no matter the dysfunction that psychology labels a person the remedy is the same: recognize and release shame guilt.

Once upon a time… shame guilt came to stay with Lois and became her uninvited guests. However, they overstayed and refused to leave. They told her many lies. shame guilt said to her that she was stupid and would not amount to anything because she stuttered and couldn’t read. They said she deserved beatings and needed to do penance for being a bad child. Lois tried to silence them, but they only grew stronger.

Despite the shame guilt bullies, Lois had many career successes. Nevertheless, the shame guilt intruders deepened her depression and added physical distortions to her body. She developed severe scoliosis with heart, liver, and lung disease, as well as childhood skull and rib traumas. Lois held firm to her inexhaustible spirit that knew a way to heal but not to her, yet.

Soon she realized that shame guilt did not belong to her but influenced her feelings, thoughts, and body. They used a disguise to hide, and she unknowingly lived in the prison of mediocrity and defeat. They changed her passion into anger and her love into hate.

She wants everyone to know that “shame guilt are not ours to own or give.” Each one of our emotions, either happy or sad are ours.

With the correct knowledge, anyone can kick the shame guilt intimidators out of their lives. 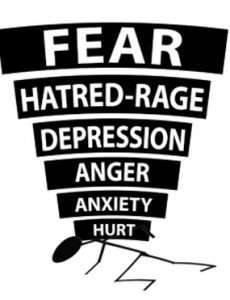 The Voices of shame guilt

When I first met Lois, I was depressed, withdrawn, and cried most of the time. I had three unhappy marriages and 15 years of psycho-therapy with medication. I still felt no confidence or self-worth, even though I was the Director of Logistics for an international marketing company

Lois, in her loving, supportive, but determined way, helped me free myself from shame guilt. My creativity soared! I stopped some of my medications. My anger and guilt were gone! I wear brighter colors with upbeat designs. Thank you, Lois. I see the value that only others could see in me. I enjoy life, instead of just living it.